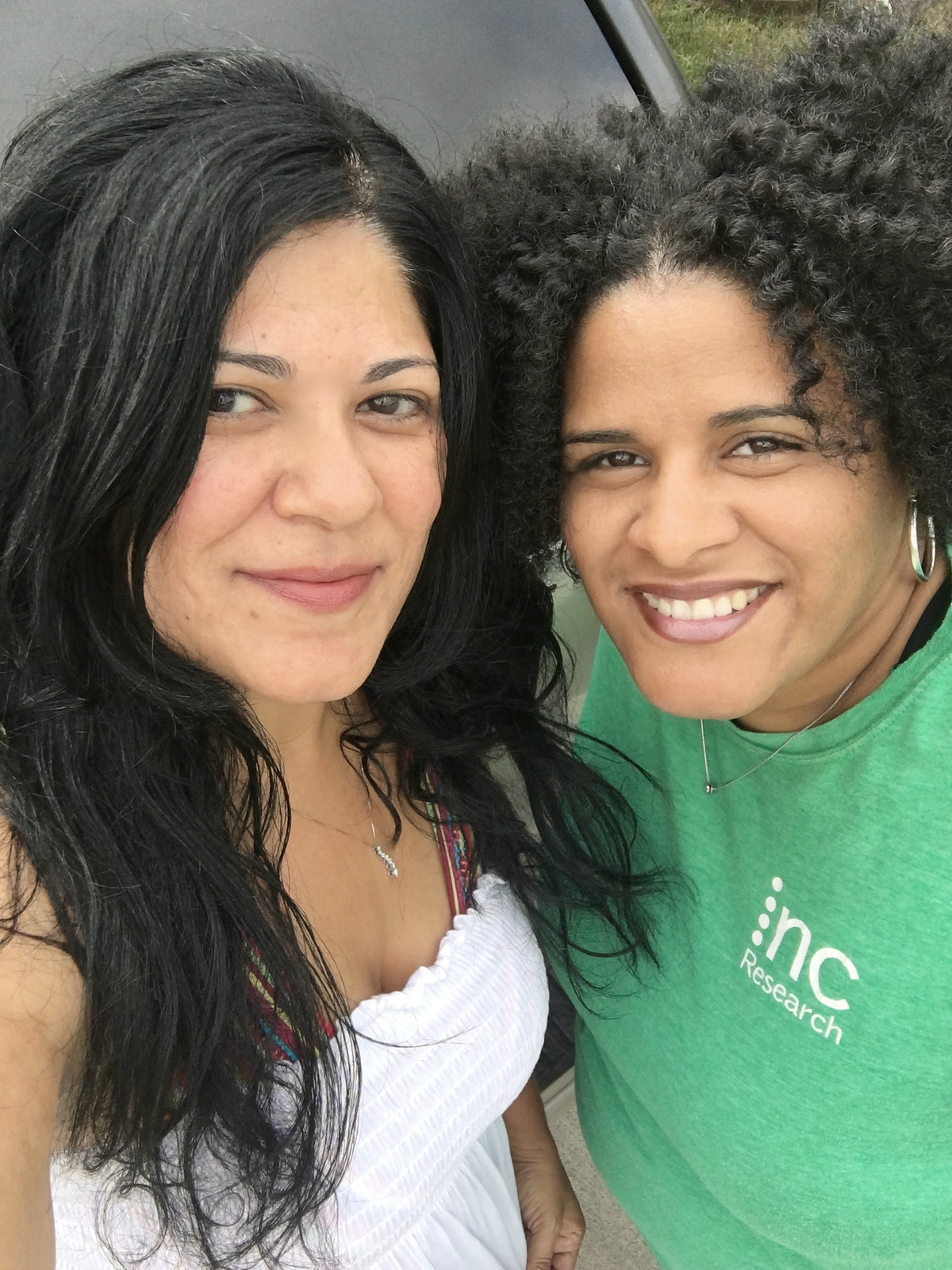 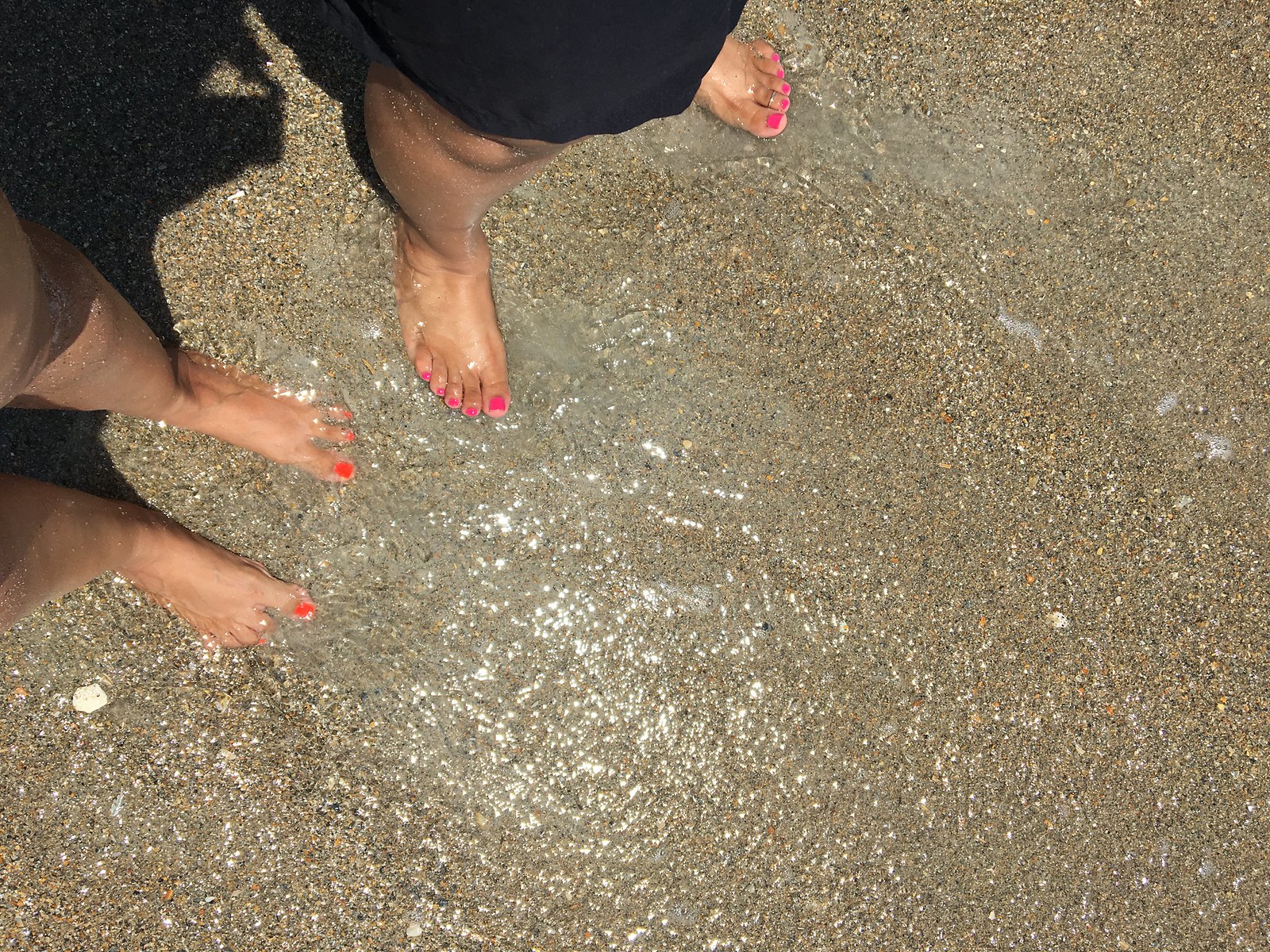 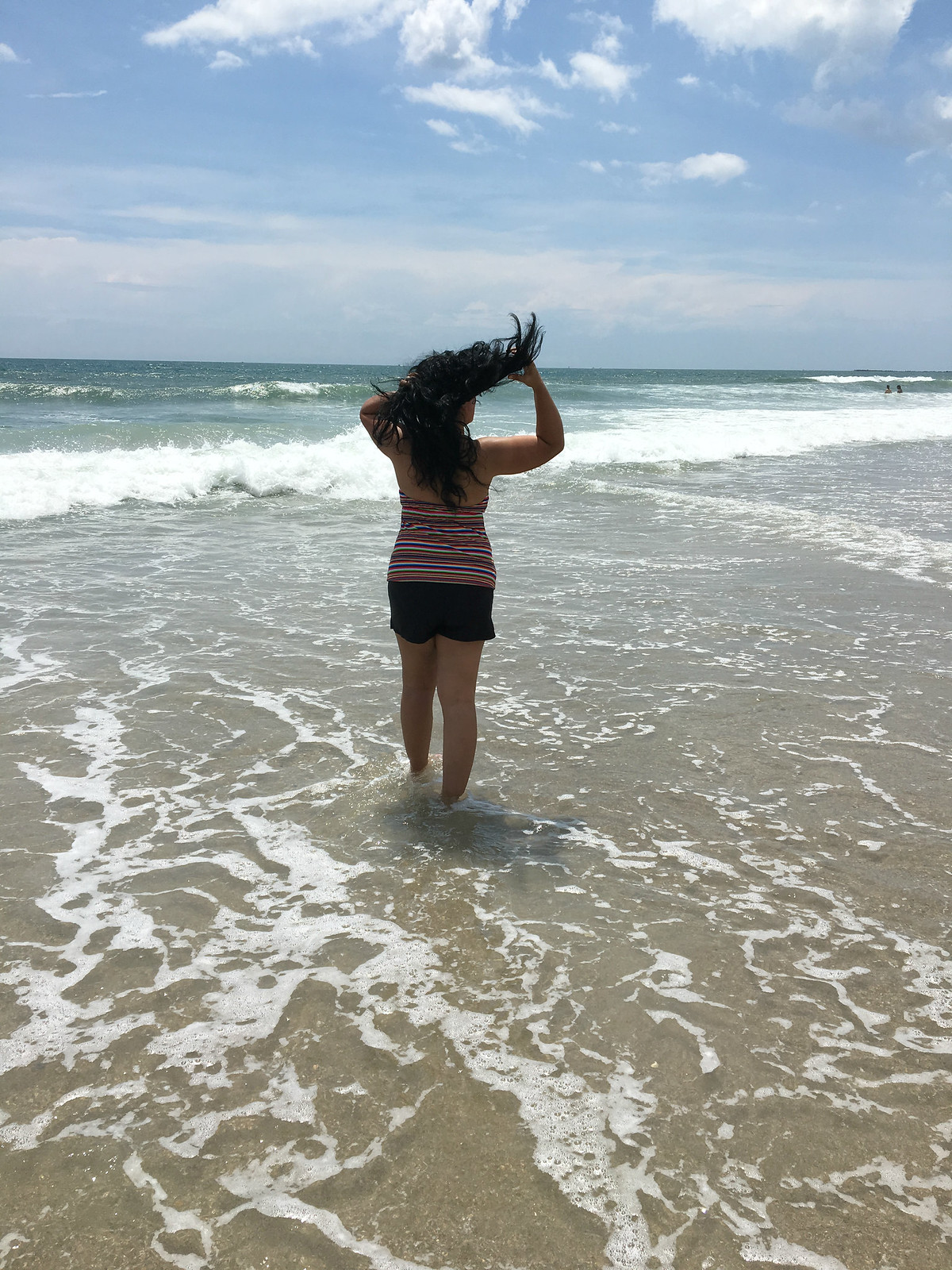 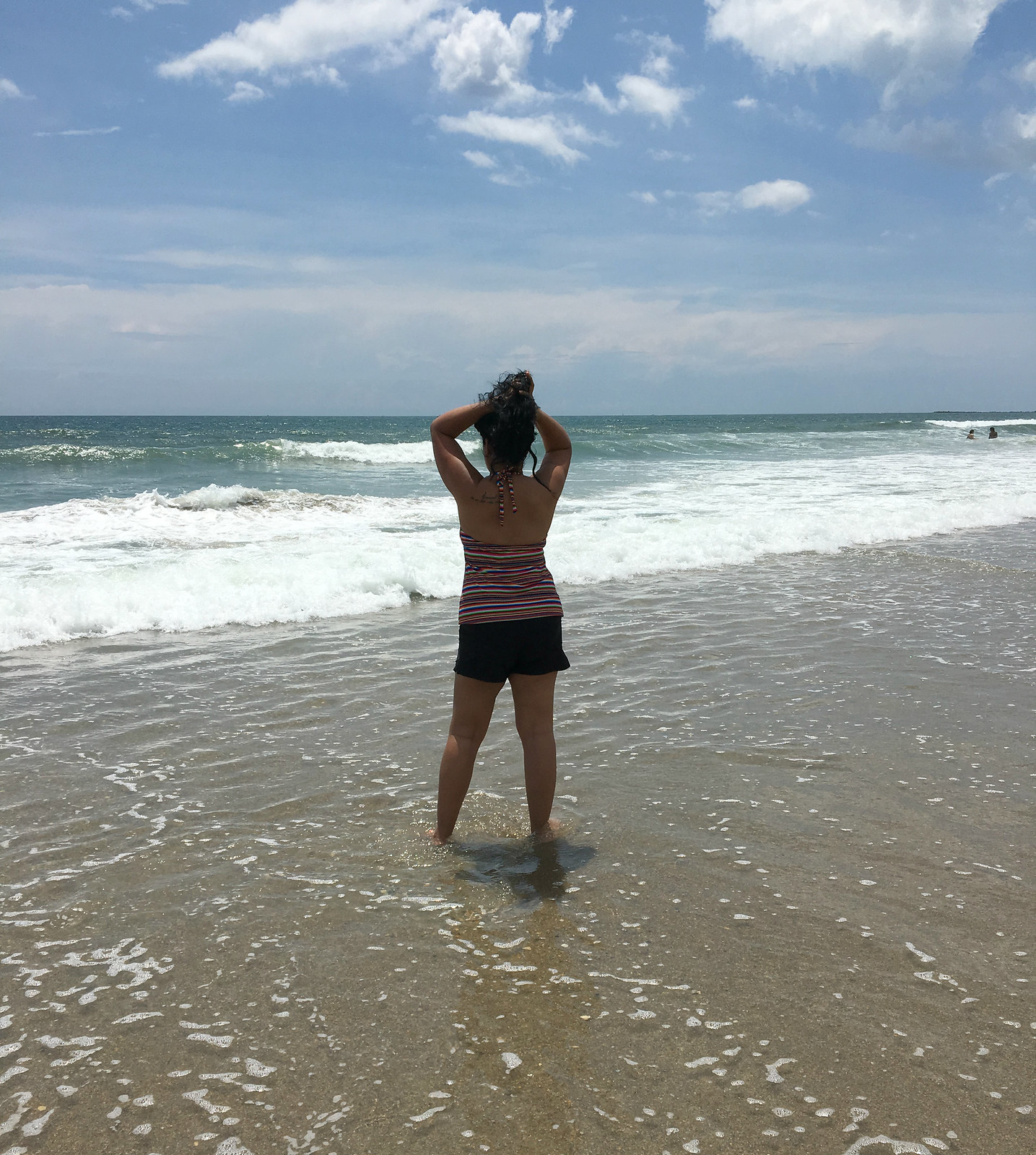 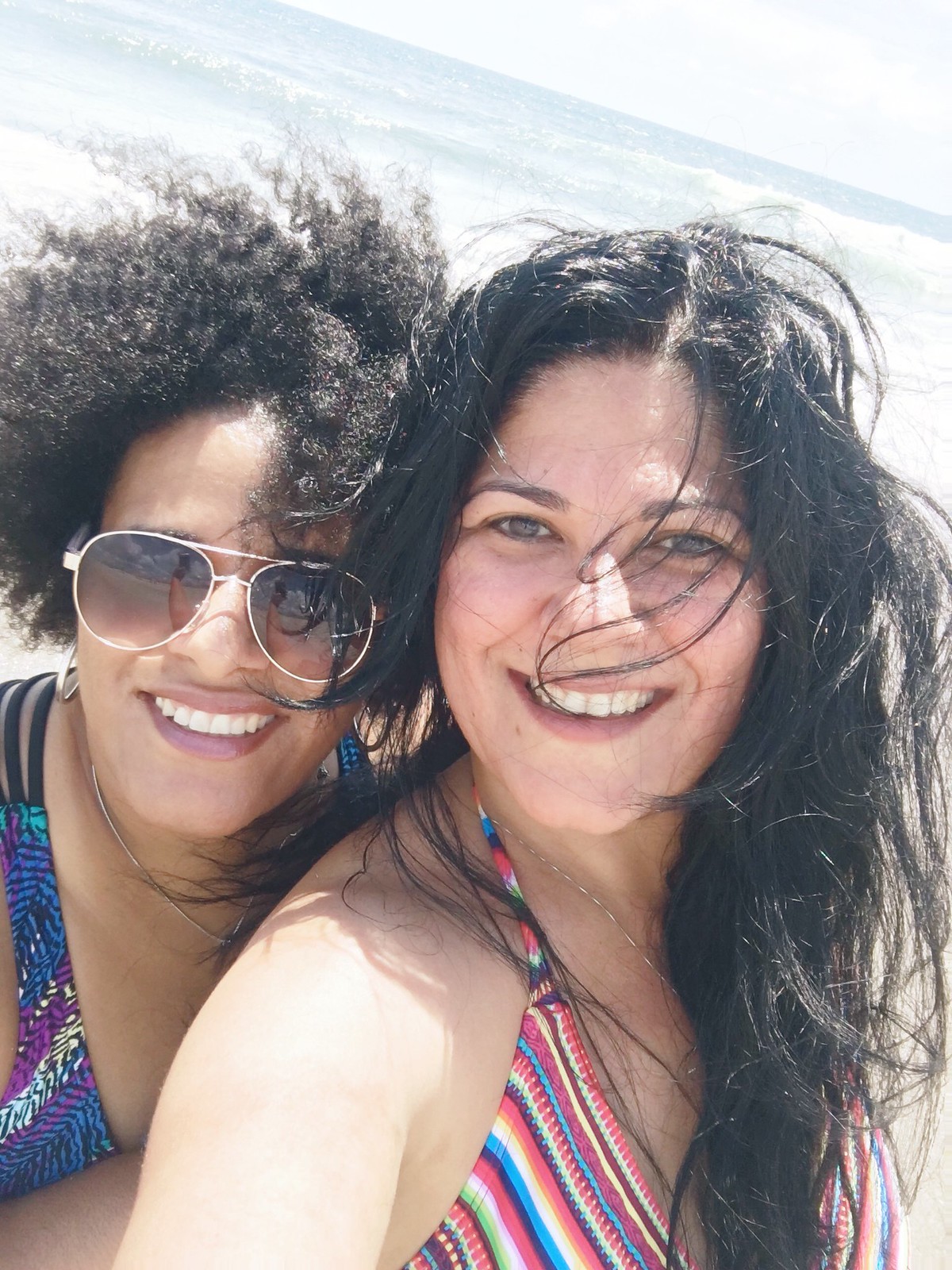 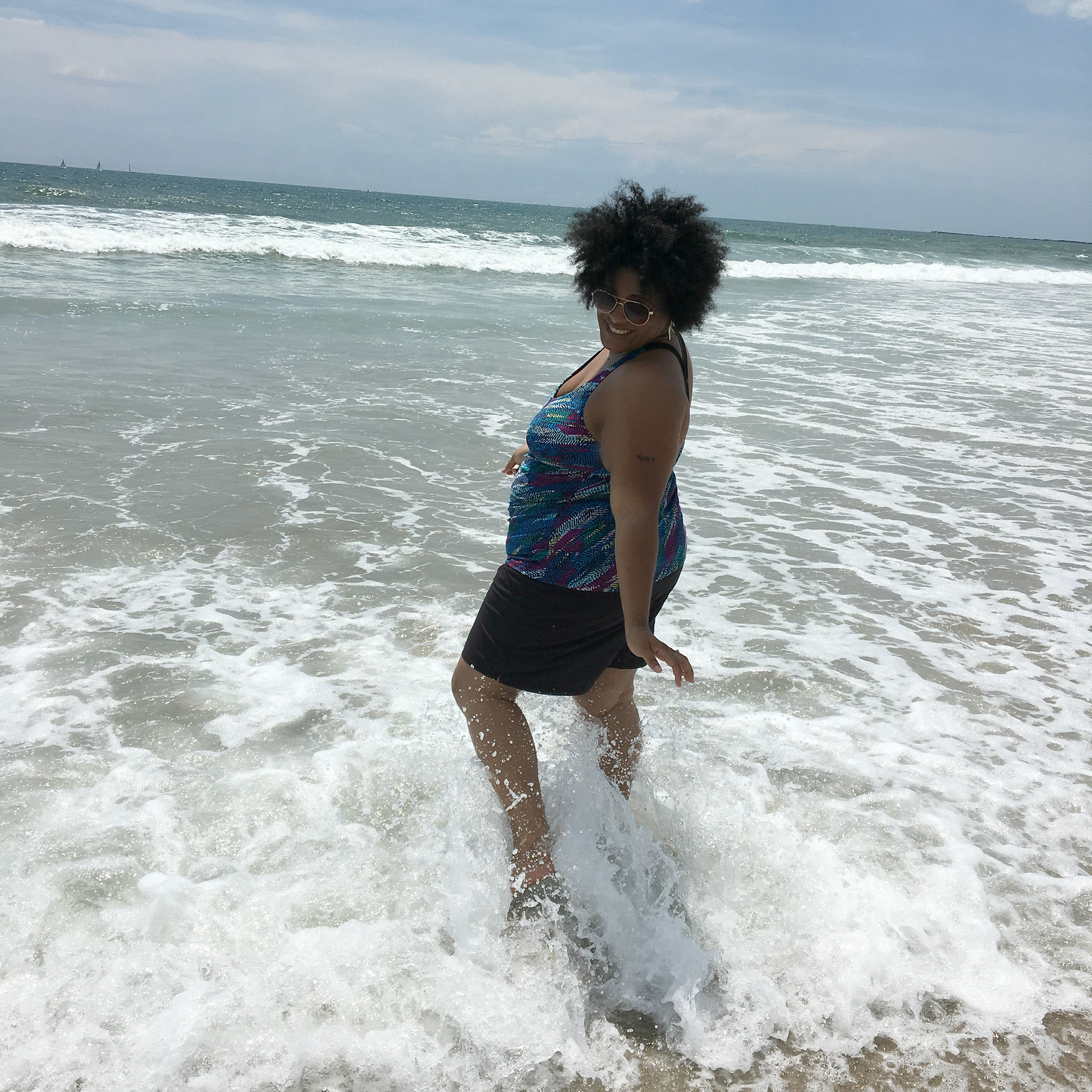 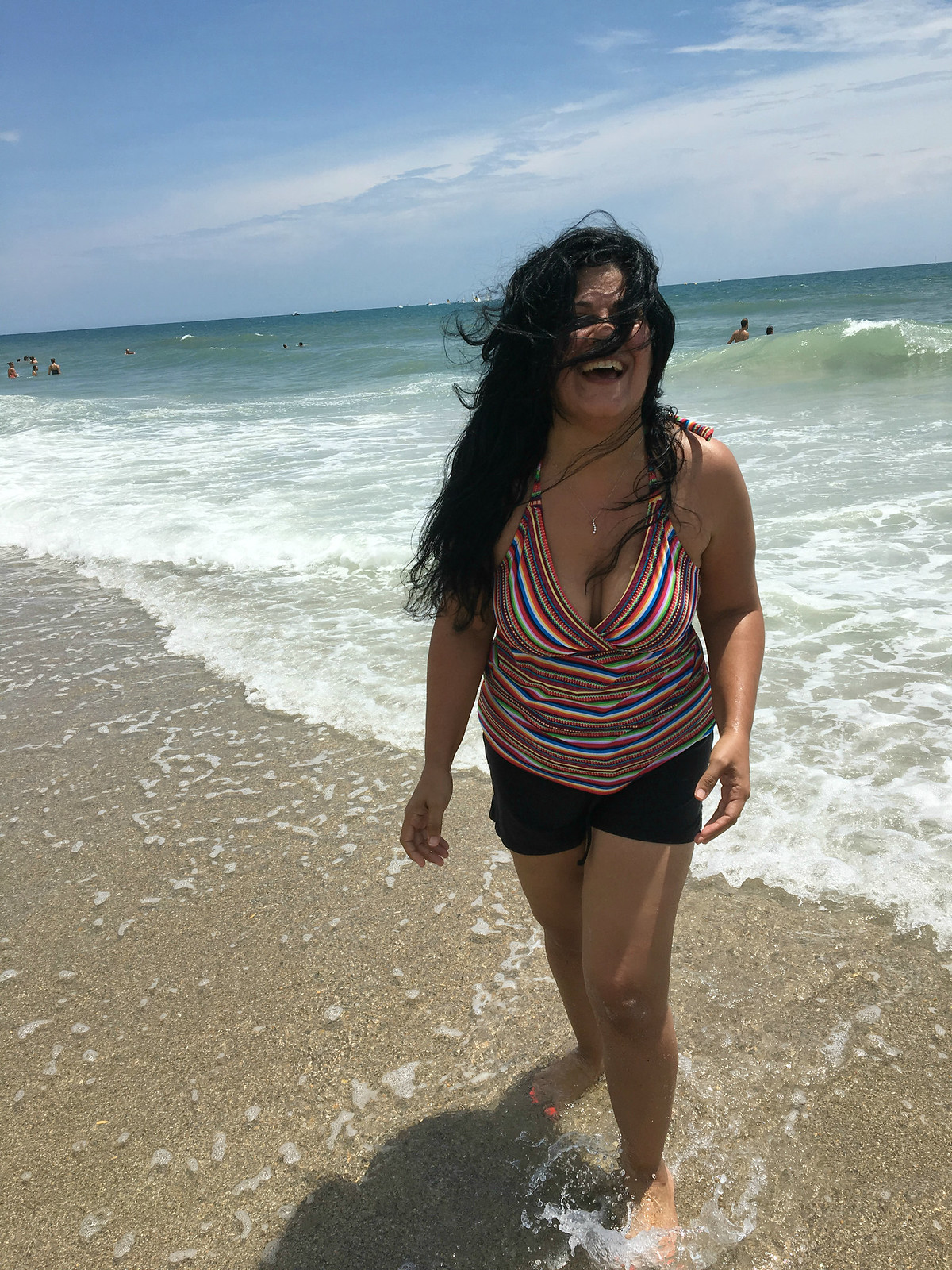 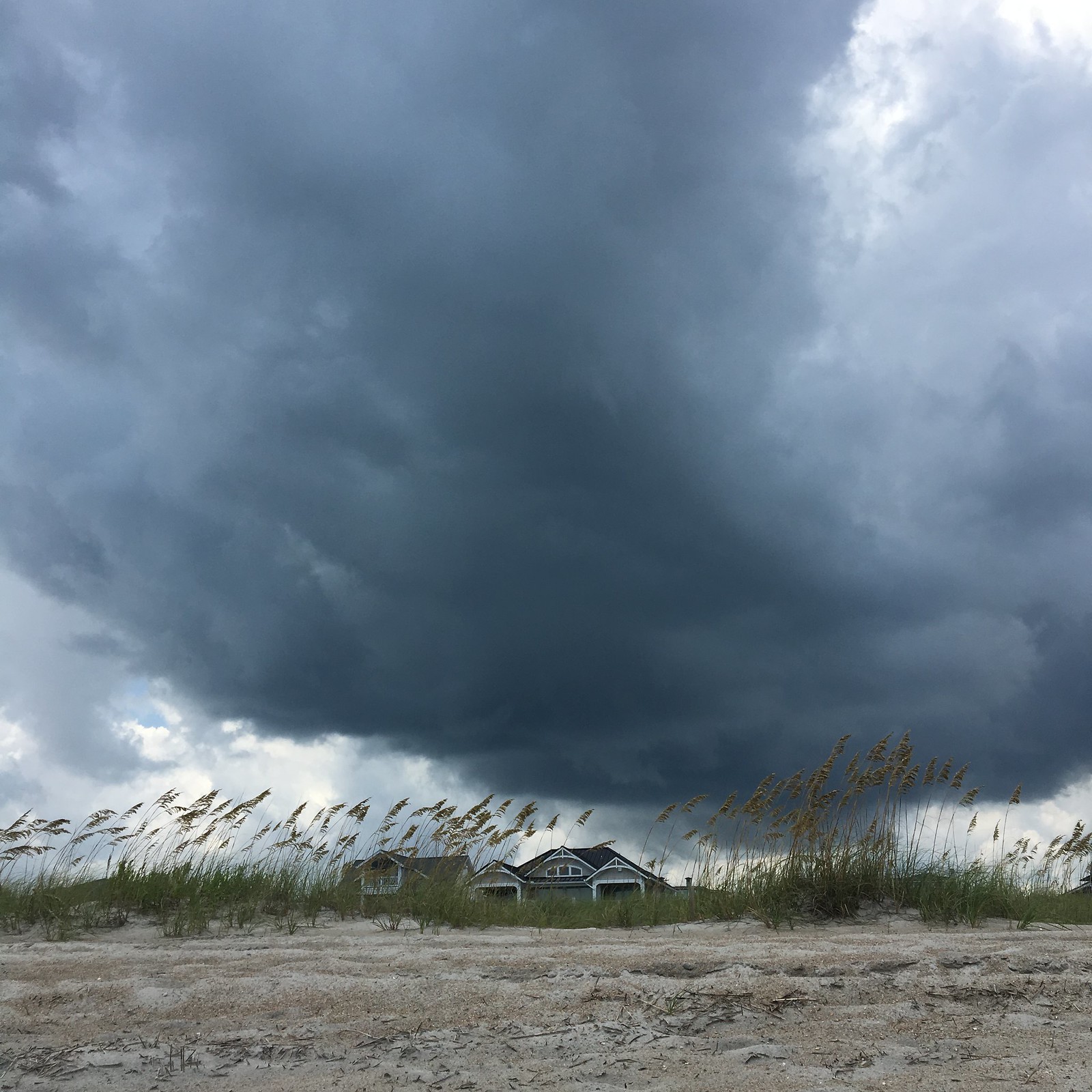 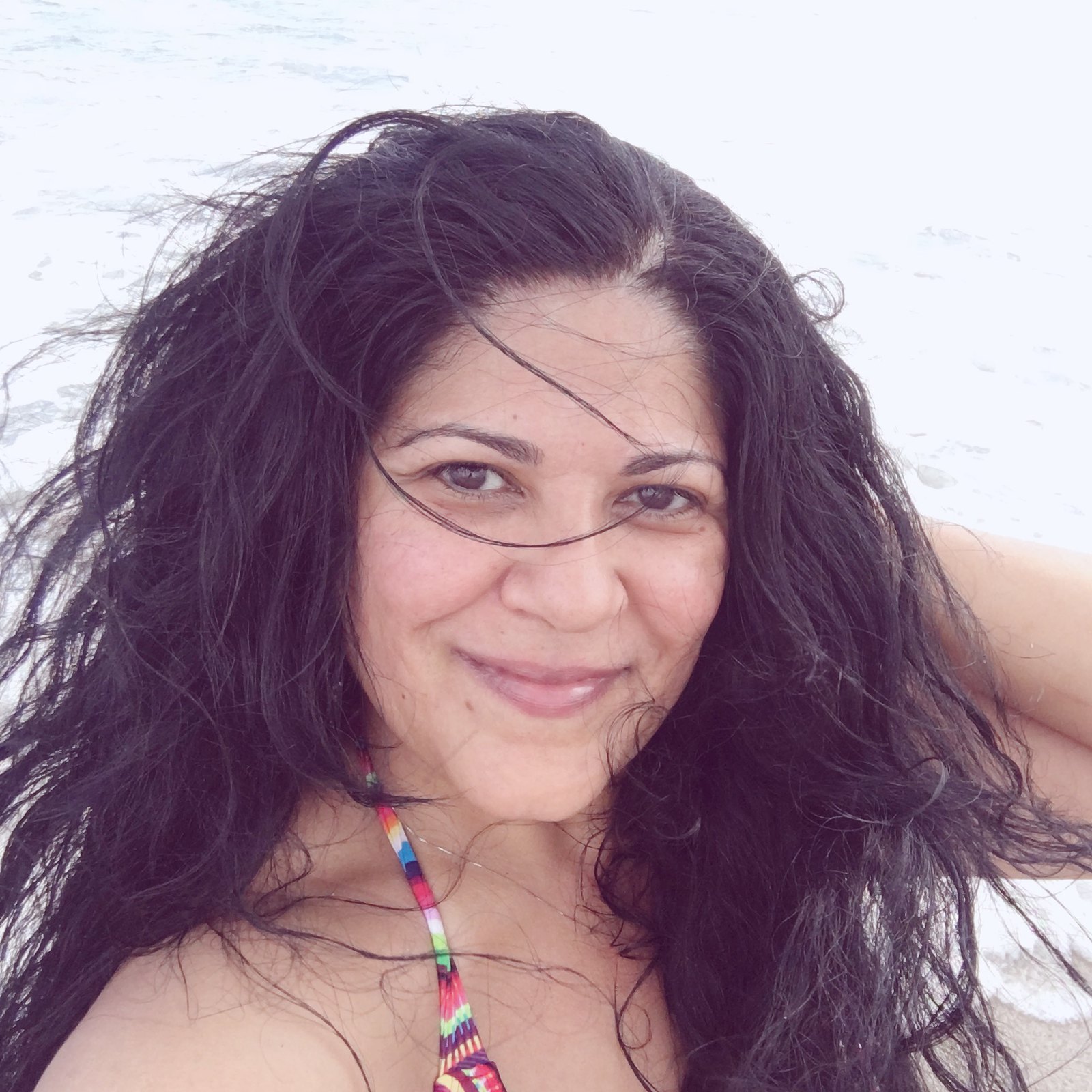 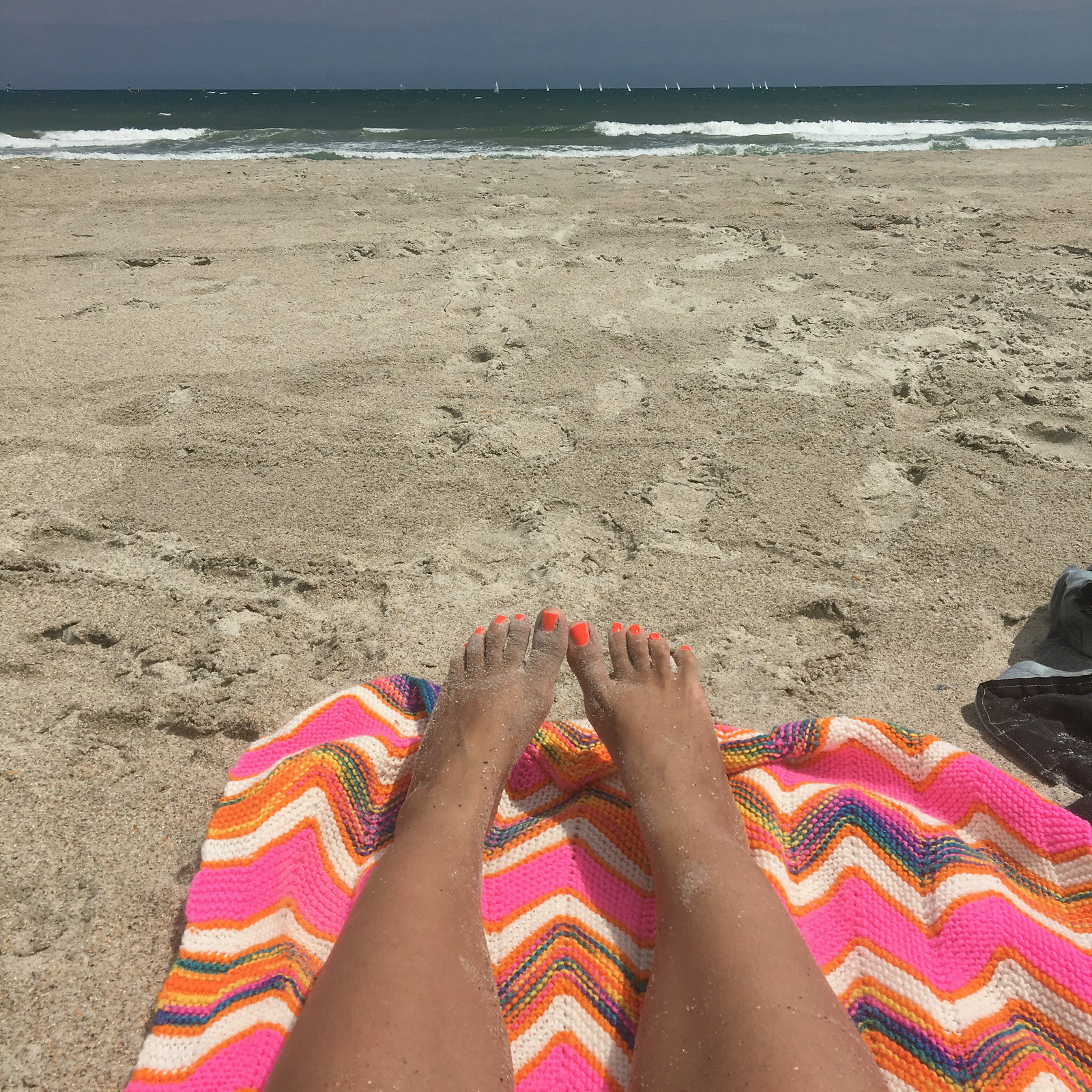 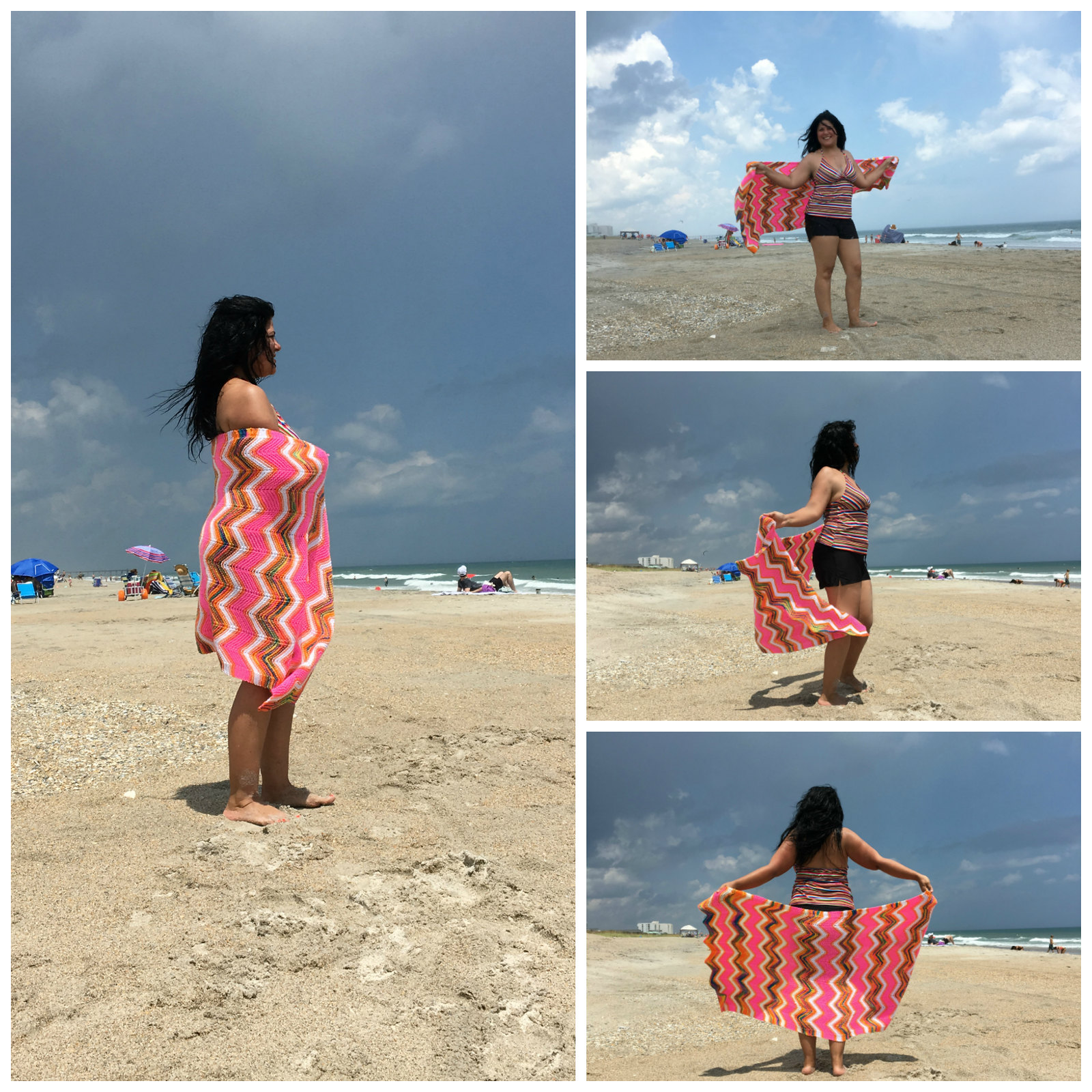 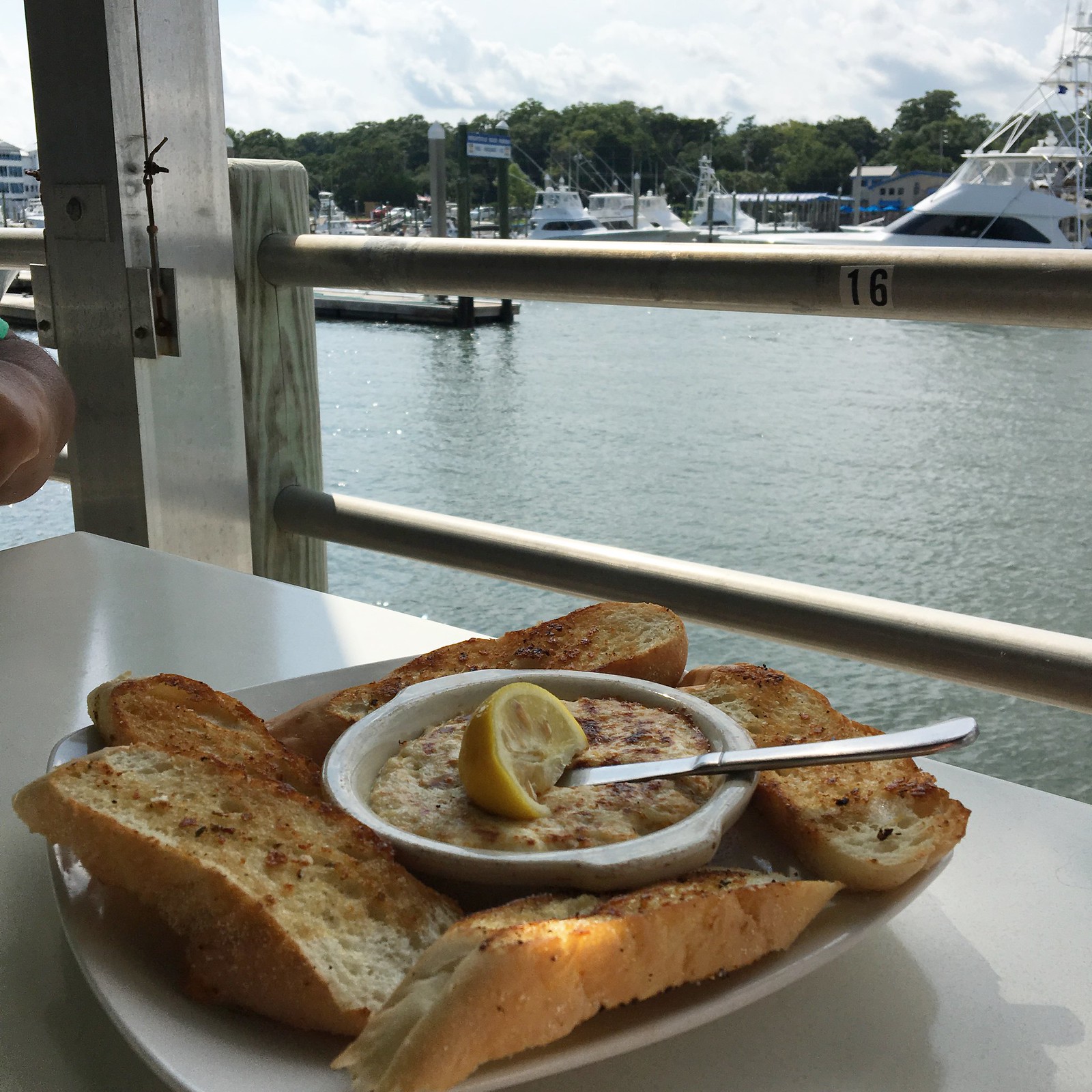 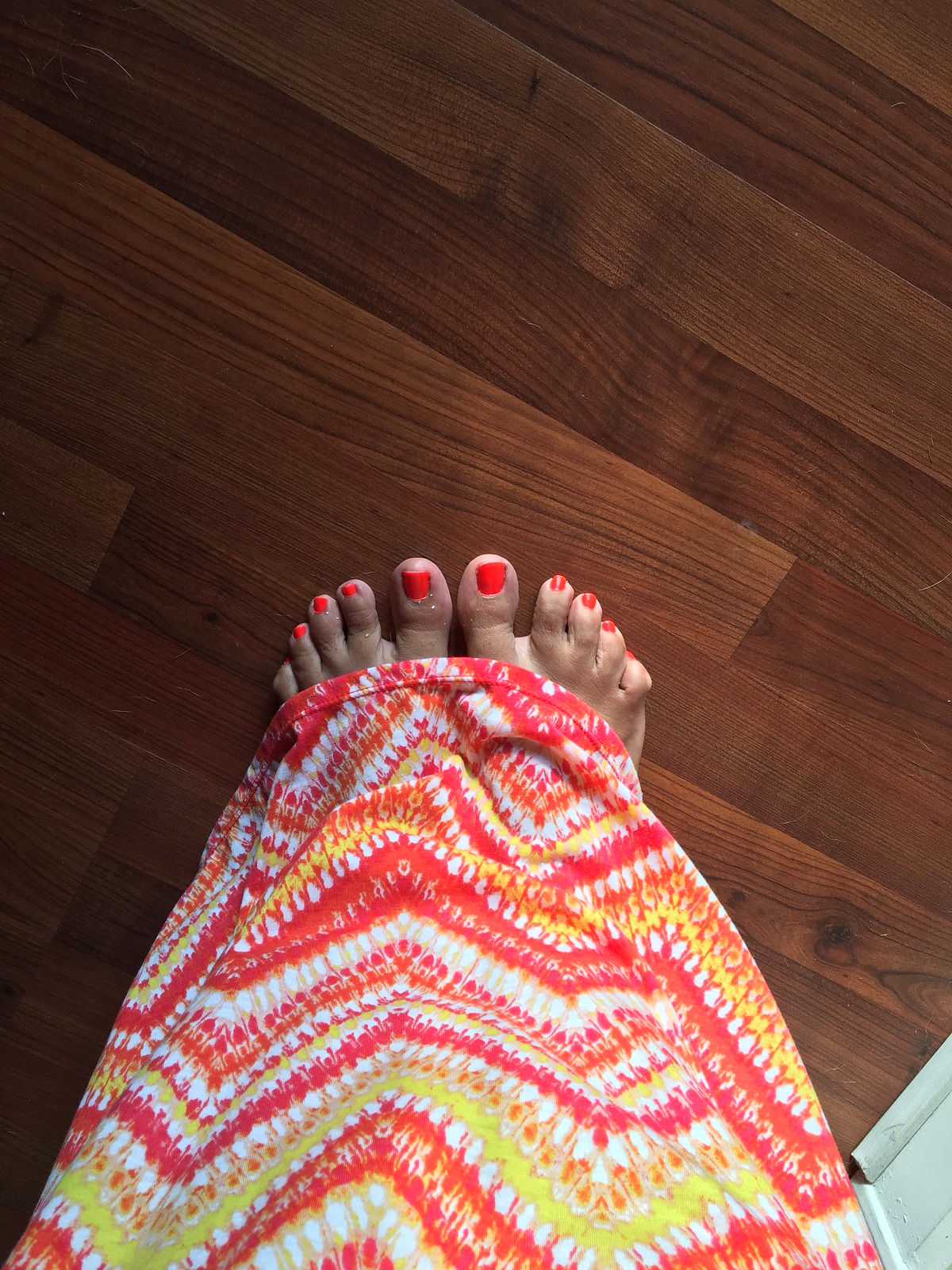 back home a shade darker and sandy

Karen and I decided we needed a sister beach day, so this past weekend we made it happen! We packed my truck with blankets, badminton, beach umbrella, and a cooler filled with fruit, cheese, crackers and water. We took a selfie and hit the road a little after 9am.

We sang to country music (a whole lot of Kenny Rogers, to Karen's dismay) talked about life and I tried to keep my speed under 90 mph. A little under 2 hours later and we were on the beach! We struggled a little pulling our cooler on the sand, but once we got settled it was all good. Well, until it started to rain! It was just a quick summer shower, and even though Karen wanted to leave, I told her were sitting through it! We had an umbrella.....all was good. The dark clouds stayed around for most of the day, but the weather was perfect! Not too hot, and salty breezes blowing. We couldn't have asked for a better day.

I finished my zigzag blanket a few weeks ago, and was able to get pictures of it on the beach. When I started it a few years ago, I pictured the bright colors on the beach. I'm so glad to finally be done with it!

After hanging out on the beach for a few hours, the sky got darker, along with low rumbles of thunder, so we decided to pack it up and head to dinner. Dinner was at a restaurant on the waterfront. We were full of sand, sunburned, and windblown hair, but we didn't care. The food was good! That crab dip in the picture was yummy! We both wanted to lick the bowl! Dinner was also good. I had coconut shrimp and Karen had a steak. As we nearing the end of our meal, we had a little drama. A couple came in, the man clearly intoxicated. They sat at a table to my back. He asked us if one of the yachts were ours, and then said, "you know I'm from Roberson County, right" Uh no....we didn't know that, but thanks for telling us. We didn't say that, but I wanted to. Not even 10 minutes after they sat down, the couple started arguing quietly at their table. All of sudden, the guy grabbed the glass salt shaker and smashed it on the table. He cut his hand and blood was everywhere. His back was to my back, and he pushed back in his chair hard and pinned me to the table. All I could think was this man was going nuts and I was pinned in my seat! He walked out the restaurant with blood trailing everywhere. It looked like a crime scene! The managers came out and asked the lady if she was alright. She said they were leaving and she was calling the cops. She left the restaurant. Behind me, the table was full of glass, salt and blood. The managers and our waitress kept apologizing for the scene. Our waitress was shaking as she handed us our checks. As we were leaving, there was a trail of blood to the parking lot, and the guy was out there, talking to the manager of the restaurant, trying to get on his motorcycle to leave! The girl was no where to be seen. Hopefully, the manager called the cops and wouldn't let him drive drunk, but we didn't hang around to find out!

All in all, it was a good day. Yeah, we had a little rain, a little drama, and a table next to us that looked like a crime scene, but still a good day.

Also, we both decided we need to stay away from people from Roberson County, wherever that is, because they may be a little crazy!
Posted by Mami Dearest
Labels: beach, sister, zigzag afghan
Email ThisBlogThis!Share to TwitterShare to FacebookShare to Pinterest